Option to choose specific attempts rather than all wipes

I’d imagine it would be a decent amount of work. Maybe not but I am curious if a feature or choice to choose say wipes 5-15 or even be able to check say 1,3,4…ect out of 15. I’m trying to get some rough numbers or averages of dps of my raiders before say 1 or 2 people die, but when there are attempts that I know just really skew results I’d like to be able to exclude them. Or for example if some of the attempts dont include a raider or two their averages are recorded as if they were they for all the wipes.

Maybe there is a way I can already do this and I’m just not aware?

Feature would most likely be added here?

Any feedback, suggestions, or help is greatly appreciated.

@Kihra Guess that’s a no? Any thoughts?

Yeah, it’s been suggested before. It’s hard to figure out a way to do it that doesn’t make the UI very complicated though.

Note you can filter on encounterDuration and encounterBossHealthPercentage, which should allow you to exclude short/bad attempts already.

Appreciate the feedback. If you ever want suggestions or feedback on it if you start working on feel free to reach out

Not 100% sure how how to make it clean either but being able to select which attempts via a check box or them listed out say like abilities that happen multiple times. Such as this: 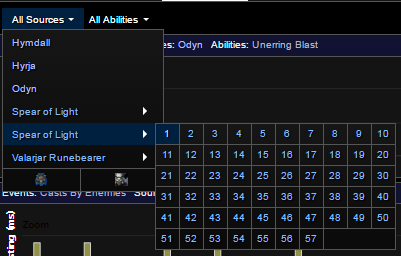 Then you could click on it to enable/disable have them highlight green or red depending on which are enabled, with some sort of list summery of what you have enabled/disabled.

Yeah that would be pretty complicated though. It’s pretty bad UI to put “checkboxes” inside dropdown menus, so more likely it would have to be an “Advanced…” button you’d select from inside the dropdown menu that would bring up a pane that let you turn things on and off.

Even then though, it would be complicated to indicate to the user in a compact form what fights you did pick after you’ve made your choices.

Worst case the user could have like 50-60 numbers representing individual fights, so how do you represent that without taking up a ton of space, etc.

This same logistical hurdle exists for multiple sources and targets (something else people have asked for). Those are pretty easy to filter on using expressions though.

I could just add WCL’s concept of the fightID to filter expressions, and then you could filter pretty easily that way. I am pretty unconvinced that average users need a UI this advanced if expressions can do it.

Another way to do it would be to just ditch the dropdown menu completely in favor of a full-page pane. You still have the problem of how to represent the user’s selection in a compact form though.

Dont disagree with you there either. Sorry started down simple checkboxes but agree they are ugly and clunky which is why I brought up the more visually pleasant idea, that users would potentially be more familer with as its look is else where. Although if there wasn’t a UI feature added for the selection being able to do it via an expression would be more than enough for the advanced user I would say. Thanks again.

Just brainstorming a little with you, as I wouldn’t end up walking through it from beginning to end but you do have this look for when all wipes are chosen. Could just have it show what is enabled, or show them all and have some sort of simple red/green highlight to visualize that a specific fight is being accounted for or not?