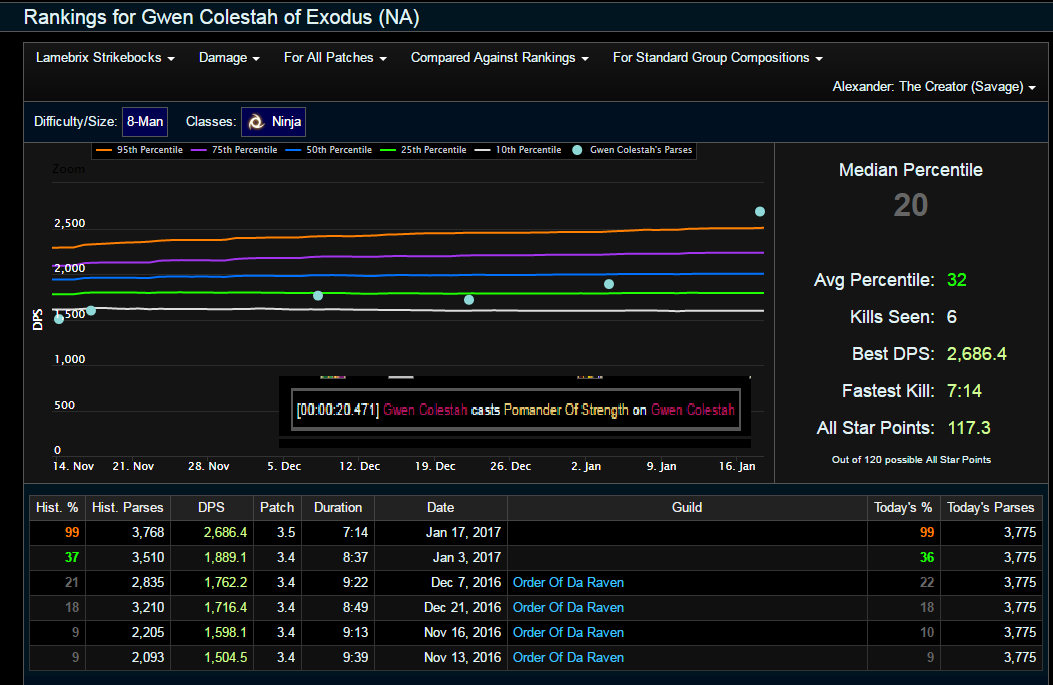 A hack has been circulated that allows people to use +40% damage with the Damage Up and Healing Potency Up items normally reserved for Palace of the Dead outside of it. THIS ALSO INCLUDES items that reduce the boss’s max health by 75+% via the Maximum HP Down debuff.

Included is a video for added effect, you can see 4 minute debuffs on the boss causing it to die near instantaneously due to reduced maximum HP (which the boss strips off when he lands due to a debuff stripping mechanic, causing his HP to drop from 36% to 9%).

Same player in question in this video as the above a10s log, Gwen Colestah of Exodus

Really this just needs to be fixed by Square, since as you point out, in most cases it won’t even be detectable by me.

I permabanned him and removed his exploited ranks.

I noticed right after I posted the last message, thanks for the quick response and hopefully it isnt widespread before a hotfix so there’s not anything else to clean up.

Pretty confident people will notice and get the person banned anyway.

I just want to express that as a member of static those logs are from and one of the two members that parses heavily, we were not aware at the time as we were focused on getting things dead after a hilarious first pull wipe from our static leader doing a bad call on A10s.

I thought it was unusual that Gwen was doing so much damage - at the time I just thought it was down to our AST getting insane Balance RNG like in our first pull. For the record I’m the summoner and I generally top our group’s meters, so I was surprised the difference over me was that much.

It’s after that raid night and in all these reddit/forum threads and video posts that we looked back into logs to find any odd occurrences. As far as I have seen Tues 17th was the only time anything like that has ever happened. None of our previous clears/farms have been influenced with HP/DMG down or poms. It makes me want to check every A12 attempt now just to be sure.

Those of us who have found out so far are really disappointed and pissed by all this as we never expected it at all. Considering the effort it took for us to get to A12 prog after a period of subbing so many members, this is a blow to our group and it makes me feel angry and sad.

Please don’t think that we as a static supported this in any way.

@Kihra I believe our static leader has emailed you about this.

I don’t see any reason why anybody other than the exploiter would be punished for this, past the offending logs being removed